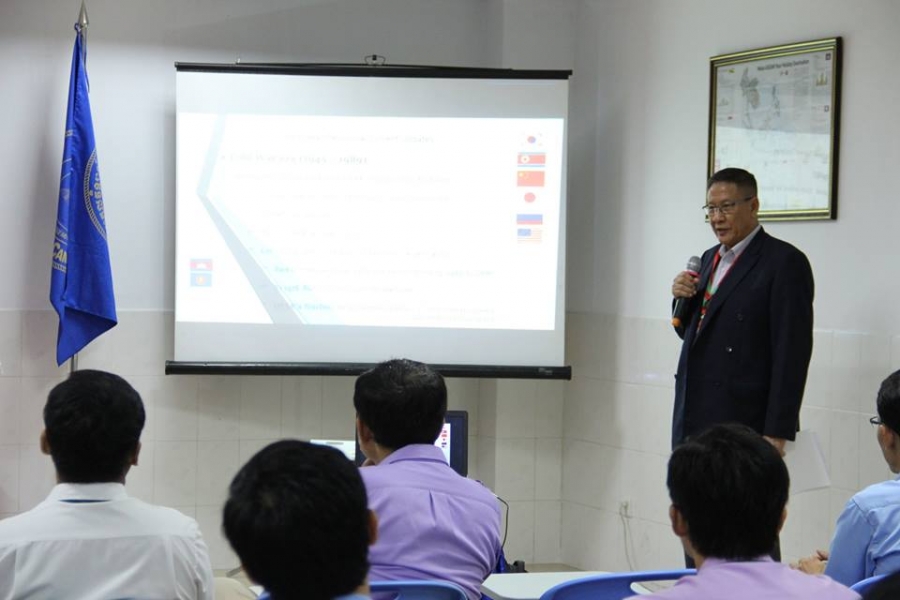 The Techo Sen School of Government and International Relations (TSS) of The University of Cambodia organized its Public Lecture Series on “Korean Peninsula: Current updates” on Saturday, May 19, 2018 from 09.00 to 11.00 am at the Cambodia Hall, 10th floor of The University of Cambodia. There were 45 participants from PhD. and M.A. students, and faculty members. Dr. Mike Minehan represented Dr. Y Ratana to preside over the lecture and Prof. Din Merican facilitated the lecture.

To start the event, Dean Keo Chhea, on behalf of the H.E. Dr. Kao Kim Houn, President and Founder of the University of Cambodia, warmly welcomed the all participants and the presidium for taking their time to participate in this lecture series and expressed satisfaction on the keen interest of the students and faculty members in learning new things and following the current issues happens around the world and in the region. He also stressed the aim of the TSS in line with the aims and goals of the University in building future qualified leaders for the country.

In presenting his lecture on the Korean Peninsula: Current updates, Prof. Keo Chhea explained the facts from the start of the issues of the Korean Peninsula, including the post WWII era, the creation of DPRK, the Korean War 1950-1953, the reunification attempts from different aspects, different parties, intentions and aims of parties involved as well as different approaches of parties involved in the issues, especially the rise of tension in the peninsula in the post-cold war era and the current situation of possible Summit between President Trump and Mr. Kim Jong-un next month. He also reflected all root causes, and effects of the issues in the regions and on Cambodia’s and ASEAN’s position toward the issues.

The participants were very interested and they generated numerous questions pertaining the possible solutions to the conflicts as well as to how Cambodia’s and ASEAN’s stands on this issue. This make the event very active and interesting.

In wrapping up, Prof. Din Merican summarized the lecture and gave his own views on the current situation of the Korean Peninsula. He also announced to the audience that TSS will keep up this tradition of giving interesting lectures to its faculty and students. He also declared that he will give a lecture on current political issues in Malaysia and its future foreign policy toward the region including Cambodia on next Saturday, June 2, 2018 and encourage all students to actively participate in the lecture.

In his closing remark, Dr. Mike Minehan, praised the tradition of conducting public lecture series and stressed that other colleges and school should do the same. He himself promised that will give a lecture on some interesting topics in the near future. He also thanked Prof. Keo Chhea for the lecture and praised the students who show their keen interests to learn more.